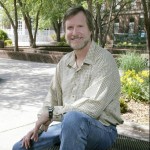 Dr. Calvin Mercer's 2021 textbook, coauthored with Tracy J. Trothen and published by Palgrave Macmillan, is titled "Religion and the Technological Future: An Introduction to Biohacking, Artificial Intelligence, and Transhumanism." Hi other work on religion and transhumanism includes co-editing, along with UK scholar Steve Fuller, "Palgrave Studies in the Future of Humanity and Its Successors," a new series that addresses human enhancement issues from all disciplines and points of view. Dr. Mercer is the co-editor of "Religion and the Implications of Radical Life Extension" (Palgrave Macmillan, 2009; reissued in paperback, 2014); "The Body in Transhumanism: The World Religions Speak" (Palgrave Macmillan, 2014); "Religion and Transhumanism: The Unknown Future of Human Enhancement" (Praeger, 2014); and "Religion and Human Enhancement: Death, Values, and Morality" (Palgrave Macmillan, 2018). His scholarly articles on the topic are found in "Dialog: A Journal of Theology," "Theology and Science," "Religions," and other edited books. He was founding chair of the “Human Enhancement and Transhumanism” Group at the American Academy of Religion. Also trained in clinical psychology, Dr. Mercer practiced professionally part-time for over a decade and uses this discipline in his published work on religion, as exampled in his 2009 book by Praeger, "Slaves to Faith: A Therapist Looks Inside the Fundamentalist Mind." He is professor of religious studies at East Carolina University and gives public lectures on the religious implications of human enhancement technology, fundamentalism, and other topics.
Calvin Mercer is a Voting Member
Calvin Mercer joined: March 03, 2018