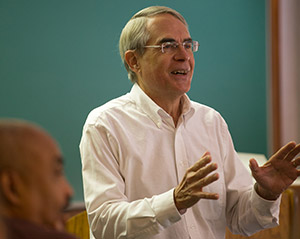 What does Christianity bring to the conversation about the future of humanity? How do we move beyond the selfishness of short-term thinking, and embrace technology as part of the renewal and transformation of all life? Ron Cole-Turner, professor of theology and ethics, and author of numerous books on transhumanism and human origins, joins us to explore these questions.

Ron Cole-Turner is the Professor of Theology and Ethics at Pittsburgh Theological Seminary, a founding member of the International Society for Science and Religion, and has served on the advisory board of the John Templeton Foundation and the Metanexus Institute

"After all, almost no one objects to the idea that human beings should strive to enhance or improve themselves."

"And to say that religion, Christianity in particular, also endorses at least some form of human enhancement is an understatement in the extreme."

"The distinction in theology is between redemption and glorification, between God redeeming humanity by restoring us to an original state from which we have fallen and glorifying or transforming us far above any original status. The bioethics distinction that is similar, and perhaps related historically, is of course the one between therapy and enhancement. Redemption and therapy are both aimed at restoring what was (or what should be regarded as a “normal” state, even if it never actually existed), whereas glorification and enhancement take us far beyond toward something completely new."

"The main point, however, is that human transformation is central to Christian thought, and thus it affects the way in which Christian theology understands not just the character but the very being of God as triune and as capable of entering into and taking up the human condition, thereby transforming it beyond all human expectation."